TANAP is fully ready to deliver gas to Europe 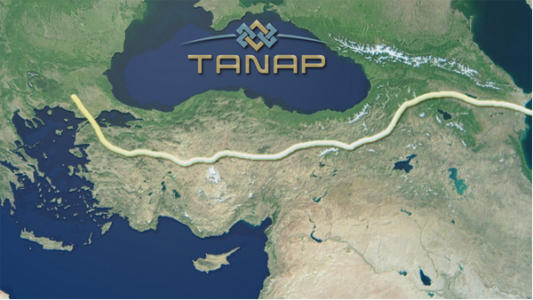 The Trans Anatolian Natural Gas Pipeline (TANAP), the major segment of the Southern Gas Corridor is ready to supply Azerbaijani gas directly to Europe from July 1, 2019. After completion of the Trans Adriatic Pipeline (TAP), the last section of SGC, the natural gas produced from Azerbaijan’s Shah Deniz 2 field will be delivered to Europe via TANAP and TAP, adding to the country’s income and making an important contribution to the European energy security. TANAP is now the longest and widest natural gas pipeline in Turkey, Middle East and Europe.The Trans Anatolian Natural Gas Pipeline, one of the most important projects of long-term strategic energy cooperation between Turkey and Azerbaijan, is complete. The 1850-km pipeline begins in the Turkish Posof district of Ardahan, runs through 20 provinces, 67 districts and 600 villages and reaches Europe at the Greek border in the Ipsala district of Edirne, is ready to deliver the first natural gas to Europe via Trans Adriatic Pipeline (TAP) on the border of Turkey and Greece from July 1, 2019.

TANAP is the most important link of the Southern Gas Corridor, designed to transport natural gas produced from Azerbaijan’s Shah Deniz-2 field initially to Turkey and onwards to Europe. The section of pipeline from the Turkish border with Georgia until Eskişehir of Turkey was launched in an international opening ceremony on June 12, 2018 with the flow of commercial gas to Turkey from June 30, 2018. The final mechanical work in the pipeline between Eskişehir and the Turkish-Greek border was completed at the end of 2018 with the first test pumping held in April 2019. TANAP, which is now fully ready to transport natural gas to Europe, is the longest and widest natural gas pipeline in Turkey, Middle East and Europe. Next year, after the completion of TAP which connects with TANAP on the Turkish-Greek border, Azerbaijan will start delivering gas to European markets.

Rovnag Abdullayev, President of SOCAR, said in his statement:

“The Southern Gas Corridor and TANAP is reality now. We launched natural gas delivery via TANAP to Turkey in a ceremony attended by the distinguished presidents of Azerbaijan and Turkey last year. Today TANAP is ready to supply natural gas to Europe and we are expecting the work on TAP pipeline to be completed. Azerbaijan has demonstrated to the world that we are more than capable of delivering complex transnational projects both at home and abroad in a timely fashion with high efficiency. During the implementation of TANAP, SOCAR and its partners saved about $5 billion, reducing the overall cost of the project by 40%. This is a great achievement of the Azerbaijani and Turkish people, who under the leadership of the distinguished presidents of Azerbaijan and Turkey Mr. Ilham Aliyev and Mr. Recep Tayyip Erdogan has entrusted us with such a historic mission.”

SOCAR President expressed gratitude to all who contributed to TANAP project: “We express our sincere gratitude to distinguished leaders of our states, who are always guiding and encouraging us, to Azerbaijani and Turkish public institutions and organizations, our partners in the project – all governmental bodies of Azerbaijan, represented by the Southern Gas Corridor CJSC, who trusted and supported us, BOTAS and BP and their leaders, as well as tens of thousands of workers and TANAP employees, who worked enthusiastically and built this project step by step, to Mr. Saltuk Düzyol, distinguished TANAP CEO, who has headed the project, to the contractors, suppliers and all of our partners, who contributed to our success with their knowledge, skills and forces, to the civil society groups, who supported us throughout the project activity, the journalists, who fulfilled their responsibilities in informing and enlightening society. We express our sincere thanks to the dear people of Azerbaijan and Turkey who make us stronger and brighten our way”.

The legal framework for the TANAP project was established in 2012. The final investment decision on the project was adopted on December 17, 2013. The construction work began in 2015 following the groundbreaking ceremony in Kars attended by the presidents of Azerbaijan and Turkey Mr. Ilham Aliyev and Mr. Recep Tayyip Erdogan. The first phase of TANAP from Turkish-Georgian border to Eskişehir was completed in June 2018. Its opening ceremony was held on June 12, 2018 and attended by the leaders of the two countries. Transportation of the first commercial gas to Turkey began on June 30, 2018. The second phase of the project from Eskişehir to Turkish-Greek border was successfully completed by the end of June 2019. The project’s investment cost was estimated at $11.7 when the final investment decision was made. Thanks to timely purchase decisions and maximizing the management efficiency this figure has been revised down to less than $7 billion.

Around 1000 social and environmental projects have been implemented in the course of TANAP construction, which helped to achieve exemplary standards in pipeline quality, environment protection, health and safety of workers.